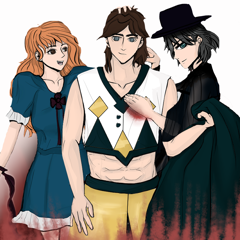 After the first Witch-Man war, Aleha, a magicless girl is on a mission to take down the emperor of Dynalivia. This is a story of a mission— Impossible, a desire for reconciliation, protection, reclamation, and someone’s darkest revenge. What will happen if a friendship turns into a romance triangle while fighting against the direst magic? Inside a world full of secrets, mysteries, disloyalty, and betrayal, Aleha has only one question. Who is the lost puppet?
Report this series